This morning we are back into our series on 1 Samuel. And today we begin a sequence of four stories that focus on the ark of the covenant, and which don’t even mention Samuel. These stories show Israel’s sad state at this time and God’s judgment on their unfaithfulness. And they also tell how Israel came to a place of repentance that sets up the narration of Samuel’s ministry in chapter 7 and beyond.

Our story today is about a battle between Israel and the Philistines, starting in the last half of v. 1 of chapter 4.

The Philistines were settled along the coast in five key cities. They were the archenemies of Israel at this time and were dominating them militarily (some of the Israelites were forced into servitude – 4:9). The battle took place in Aphek about 20 miles north of Philistine territory and about 20 miles west of Shiloh (where the tabernacle/temple was). Israel was encamped at Ebenezer, probably just East of Aphek. Israel suffered a great loss.

3And when the people came to the camp, the elders of Israel said, “Why has the Lord defeated us today before the Philistines?”

When ancient peoples fought, as they saw it, it really involved a fight between the God or gods of the two nations. And so if you lost it meant that your god was defeated, or perhaps it would be interpreted that your god was unhappy with you. And this was certainly the case for Israel’s God, Yahweh – the only true God. The Lord God is all powerful, so he must have allowed this, as the Elders surmised.

So the Elders of Israel come up with a plan.

(One is justified in wondering why the Elders didn’t consult Samuel.) The ark of the covenant looked something like this. 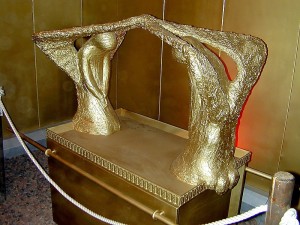 Now it wasn’t necessarily wrong to bring the ark. The ark was used in battle, for instance when Israel defeated the city of Jericho (Joshua 6). And the title for God here, “Lord of hosts,” refers to God as the leader of his armies, both human and angelic.

The problem is that the diagnosis of their defeat is too shallow. In truth God allowed them to be defeated because of their unfaithfulness – which is highlighted here by the mention of “the sons of Eli, Hophni and Phinehas.” As we have already seen these two sons of Eli the high priest were publicly known, flagrant sinners. And Eli did not stop them from being priests while they broke God’s law.

The proper course of action would have been to seek the Lord and to repent of their sins, thus restoring God’s blessing to their lives. But they didn’t think the problem was with them. They just thought that if the ark came, God would come and help them. As v. 4 says,  “that it (the ark) may come among us and save us from the power of our enemies.”

The story goes on,

5As soon as the ark of the covenant of the Lord came into the camp, all Israel gave a mighty shout, so that the earth resounded (or shook).

Israel has new morale and boldness, because they think that God is now with them. [The shout here and the movement of the earth echoes the story of Jericho – Joshua 6:6-21].

6And when the Philistines heard the noise of the shouting, they said, “What does this great shouting in the camp of the Hebrews mean?”

You can feel their concern rising. And they must have sent some people to check out what was going on, because next it says,

And when they learned that the ark of the Lord had come to the camp, 7the Philistines were afraid, for they said, “A god has come into the camp.” And they said, “Woe to us! For nothing like this has happened before. 8Woe to us! Who can deliver us from the power of these mighty gods? These are the gods who struck the Egyptians with every sort of plague in the wilderness.

Here their fears are on open display. They don’t quite get the details right – they talk about Israel’s gods and think the plagues took place in the wilderness, but they have heard of how Yahweh’s power struck the Egyptians. And now here is the visible presence of Yahweh, his throne, in the Israelite camp, which must have been quite unusual for the Israelites to do, at least with the Philistines, since they say, “nothing like this has happened before” – v. 7.

They can only say, “Woe to us, woe to us.” This is certainly what the Elders of Israel had wanted, to put fear into their enemies. But then something suddenly changes, because they don’t stay afraid.

9Take courage, and be men, O Philistines, lest you become slaves to the Hebrews as they have been to you; be men and fight.”

After having said “Woe to us” twice, here they rally and call each other to “be men” twice. Instead of giving up, they decide that they need to fight harder than they ever have to overcome such a powerful foe, so that they don’t become the slaves of the Israelites.

And then the story ends,

10So the Philistines fought, and Israel was defeated, and they fled, every man to his home. And there was a very great slaughter, for thirty thousand foot soldiers of Israel fell.

Even though they brought the ark, the Israelites suffered a much worse defeat, more than seven times the losses.

The title today is “The futility of lucky charm religion” A lucky charm is something that you think has power to protect you and give you success. In Israel’s time of difficulty – a military defeat – instead of coming to God and repenting and moving into faithfulness, they treated the ark of the covenant as a lucky charm; as an object that would bring God’s power to protect them and give them success. Instead of right relationship with God, they went with a mere object that represents God to bring them the help they needed.

I say “The futility of lucky charm religion,” because we see the results of this – their defeat was increased over seven-fold.

A challenge for us

– in this story. Sometimes we act just like these ancient Israelites. We are not walking in right relationship with God; we are unfaithful to God. And when God disciplines us with hard times for this – instead of dealing with the real issue – our unfaithfulness (hey, the problem can’t be with me!), we look to things that are connected to God and think that these will guarantee that God will take care of us.

None of these things are wrong, just as it wasn’t wrong to bring the ark. They are wrong only when we make them substitutes for dealing with the core issue of our sin and unfaithfulness. And given our undealt with unfaithfulness, we turn these things into lucky charms which can’t protect us and take care of us.

No, God is patiently waiting for you to turn from your unfaithfulness and come into a right relationship with him through confession of you sins, repentance and finding forgiveness. And then God will make his power and love known to help you and take care of you.

[This is also the message of Jeremiah in chapter 7 to a later generation of Israelites, who thought that God would not judge their sin because they had the temple of the Lord in Jerusalem. Jeremiah refers back to this episode in 1 Samuel. That’s because, as we will see next time, the tabernacle/temple at Shiloh was destroyed, even as the ark was captured by the Philistines. God brings judgment, not salvation when we turn his things into lucky charms.]