When someone wrongs us a struggle is unleashed within us to see whether we will be overcome by it so that we respond in kind, or whether we will overcome the desire for payback and choose love. This is what we’re talking about this morning.

According to the world there’s really only one way to respond – we should strike back; we should harm our enemies in return. Now God put a limit on this when Moses taught in the Old Testament, ‘an eye for an eye, a tooth for a tooth.’ (Exodus 21:23-25, Leviticus 24:17-2, Deuteronomy 19:19-21 in contrast to Genesis 4:23-24) That is, the payback has to be in proportion to the injury suffered. But still there is in our world an endless cycle of people harming each other through personal vengeance, the justice system and warfare.

But Jesus shows us another way; the way of love. For when Jesus’ enemies sought to kill him he endured the harm and suffering of the cross and returned good for evil. And in doing so he shows us how to overcome evil with good. He wasn’t overcome so that he did harm back to his enemies. He overcame through the power of love.

Paul speaks of this in –

And I want us to look more closely at this passage today.

“Beloved, never avenge yourselves, but leave room for the wrath of God; for it is written, ‘Vengeance is mine, I will repay, says the Lord.’ No, ‘if your enemies are hungry, feed them; if they are thirsty, give them something to drink; for by doing this you will heap burning coals on their heads.’ Do not be overcome by evil, but overcome evil with good.”

First we look at the negative side of this –

Being overcome by evil

How will we respond? It’s natural to be angry and to want justice; in fact, we usually want more than “an eye for and eye;” we want to give back much more harm than we got. Evil is very powerful. Once we fall victim to it, it gets into our system and tries to replicate itself through our anger so that we start doing evil as well; so that we start harming people.

The question is, ‘What will we do with our anger?’ 1. Usually we give in to our anger to one degree or another; our desire for justice. And when we do this 2. we return harm for harm. In various ways through our words and our deeds we seek to hurt and destroy our enemy. 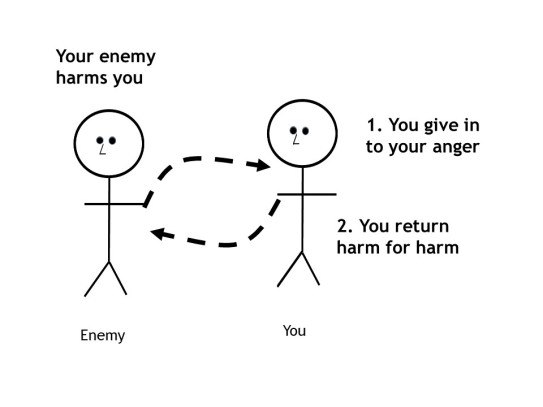 The result is that you are now harming another person, just as your enemy harmed you. You are doing the same thing. You have been overcome. You are now caught up in the cycle of evil for evil; harm for harm just responding to others based on how they’ve treated you.

But harm for harm never truly satisfies, even, for instance, if someone kills your family member and the criminal is executed. It doesn’t restore what was taken away from us. It doesn’t give us peace.

You may even the balances and that might feel good on a certain level, but you will never overcome the evil done to you with more harm. So we should set this response aside. As Paul says in Romans 12:17 – “Do not repay anyone evil for evil,” or as it is better translated “harm for harm,” referring as it does to the teaching of “an eye for an eye.”

Let’s look now at the other side of this –

How to overcome evil with good

Paul tells us to do this in v. 21 – “overcome evil with good.” There are three steps in this process. When an enemy injures us:

1. Endure the harm without giving it back. Paul says in v. 19 – “Beloved, never avenge yourselves.”

Now, there’s a lot that we can do, within the limits of loving our enemies. That is to say, this doesn’t mean be passive and just take it. We can stand up for ourselves and for what is right. We can point out wrong. We can use force to stop an evildoer from what they’re trying to accomplish. There are redemptive things we can do in relation to our enemy. But fundamentally the point here is that we should not return evil for evil, harm for harm.

So let’s say someone breaks into my house and wants to hurt my family. If I could, I would stop them, let’s say disarm them. They have a bat and hit me hard, but I eventually take it away. What I can’t do is then take the bat and beat them. And I certainly can’t kill them because Jesus calls us to love our enemies, not destroy them.

2. Look to God for your justice. v. 19 goes on to say, “Beloved, never avenge yourselves, but leave room for the wrath of God; for it is written, ‘Vengeance is mine, I will repay, says the Lord.’”

It’s normal to have anger when someone harms you. This is due to our sense that an injustice has happened. This is how God made us. We are not to deny this or try to suppress it. And indeed God gives us the capacity for anger to stir us up to act to make things right.

Anger is not wrong. It’s what you do with your anger that’s the issue. Paul teaches us that we are to place our angry desire for payback in God’s hands. This is the key to overcoming evil and breaking out of the cycle of evil for evil; harm for harm – giving the agenda of justice or payback over to God.

He can fight for us and judge our enemies according to his will. This is what God says he will do, “I will repay.” Not, “you will repay,” but “I will repay, says the Lord.” So when we suffer harm from an enemy, pray something like this, “God I have been wronged. Take note of this and act for me in a way that is pleasing to you. I give it into your hands and trust you with it.”

It’s our trust in God that sets us free. We know that God can handle it. It might not happen right away; it might not happen until the final day, but all wrongs will be righted by God. We can trust God to take care of us.

3. Love and do good to your enemies.  Once we’ve placed the agenda of payback into God’s hands this frees us up to love our enemies and do good to them. We can focus on mercy, since we know that God will take care of issues of justice.

Paul says in v. 20 – “if your enemies are hungry, feed them; if they are thirsty, give them something to drink.” Rather than harming our enemies we return good for evil.

This is counter-intuitive. It goes against what our flesh desires, for sure. But we can only overcome evil by returning good for harm; by choosing mercy and love. This releases us from being captive to the cycle of anger, hatred bitterness and harm for harm. The circuit is broken. We’re set free! Our trust in God sets us free.

Now we hope that such acts of love will lead our enemy to repent, and we should pray for this. But if not, we know that God is more than able to deal with them. Such judgment is described in v. 20 as “burning coals” coming down on their heads.

When his enemies conspired against him:

1. He endured the harm without giving it back. As 1 Peter 2:23 says, on the cross, “when he was abused, he did not return abuse; when he suffered, he did not threaten.”

2. He looked to God for vindication. 1 Peter 2:23 tells us that while he suffered, he “continued entrusting himself to him who judges justly.” He gave the agenda of payback and justice into God’s hands.

3. He continued to love his enemies doing good to them. As Luke 23:34 tells us, while he was on the cross, he prayed for his enemies, for mercy and forgiveness. While they were busy murdering him, he was dying for their sins.

Jesus models for us how to overcome evil with good on the cross. As Peter says Jesus left us an example, “so that (we) should follow in his steps” – 1 Peter 2:21.